This course will present the traditional Chinese practice of using the medicinal qualities of common herbs and spices, as an external form of therapy for stimulating the channels system – known as Tiān Jiǔ 天灸 or Heavenly Moxibustion

This kind of practice has been in use throughout China's history, as a folk remedy to treat and prevent illness, without the use of acupuncture needles or burning moxa

Expand your "Clinical Toolbox" with an effective and simple form of external therapy, using herbs instead of acupuncture needles or moxa 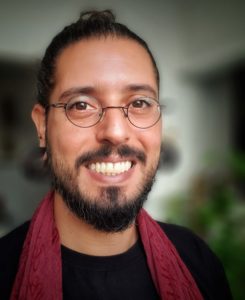 Shay Sharabi has been a practicing acupuncturist and herbalist since the year 2010. He holds a Diploma of Chinese Medicine from East-West-The Israeli School and Center of Classic Chinese Medicine, Tel Aviv, Israel. After working in a Chinese herbs pharmacy, he flew to China for short term studies at the ZhongFang Red Cross International Hospital for Chronic and Difficult diseases in Hunan
After that visit to China, he started deepening his knowledge of Chinese medical and philosophical texts, focusing his practice mainly on internal and external application of Chinese single herbs and prescriptions for treating various diseases. As a big fan of the ancient, experience based, form of Chinese medicine, Shay kept sampling and trying various methods of treatment on himself and in his private clinic, using both well known Chinese prescriptions and folk remedies. Since 2018 he is researching the medical texts for methods of treatment and preventing diseases – especially those treatments who are time related. This research has led him to start teaching practical workshops on using "Heavenly Moxibustion" – a truly ancient form of external treatment, hardly known to western practitioners – based on the sole use of well known and commonly used herbs and spices, to stimulate the channels system in order to treat and prevent diseases